Within a few months of moving to the DC area, my friend and fellow foodie, Kelly, organized a cooking club – not to be confused with dinner club. Back in Seattle, Kelly gathered with friends once a month to cook a delicious meal featuring locally produced ingredients together – to learn from each other and enjoy each other’s company. Luckily, she was easily convinced to start a DC version of this fantastic monthly event. Unfortunately, I was sick and missed in the DC Inaugural Feast, however, here’s Kelly’s version of the night’s FEASTivities:

For an appetizer we made roasted pumpkin hummus in advance so we had something to snack on while we cook, go to this link for the recipe. We served the hummus with pita bread, celery, and crackers. This hummus packs a big kick fueled by cayenne pepper complemented by a touch of cinnamon. You can definitely taste the pumpkin whereas the chickpeas served to provide some thickness to the dip. The pumpkin was picked at the Homestead Farms in Poolesville, MD. The spices were selected at The Glut Food Co-op in Mt. Rainier, MD. 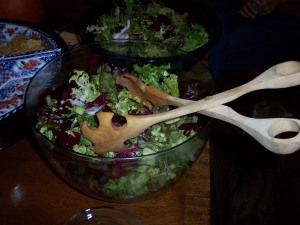 For the main course we made two different types of vegetarian pot pies. The first was Kim’s recipe, which can be made with any seasonal root vegetables, tubers, or other such veggies. The Havarti dill cheese roux was amazing and we could smell the delicious aroma escaping from the oven as it cooked. This pot pie was slightly sweet and creamy, a creative variation on this traditional dish.

Our second Thanksgiving pot pie from Vegetarian Times won the grand prize in the magazine’s Thanksgiving recipe contest, and was certainly a winner with us. This pot pie tasted just like traditional turkey pot pie, only made with mouth-watering tofu. We decided not to use a plastic bag to form the crust as this seems a bit laborious to us and instead stuck with rolling it out on a board. The crust was perfectly flaky and buttery. 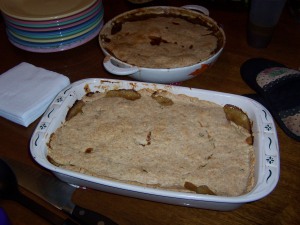 As we completed our main course we sat for a moment to let everything settle. Then excitement about the dessert built up and we returned to the kitchen to make apple cider donuts. These were amazing! 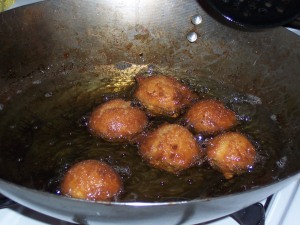 We started by making some traditionally shaped donuts and quickly turned to making donut holes which were more easily rolled and held their shape. Using paper bags we completed the donuts in either a cinnamon and sugar or powered sugar coating. Delicious! These will definitely be made again – perhaps we’ll experiment with beer batter next time.